Sorbitol is a type of sugar alcohol (or polyol), which is commonly found in a range of fruits and vegetables. It can also be found in toothpaste, mouthwash, chewing gum, soft drinks (used as a low-calorie sweetener) and in low-calorie and diabetic food products as a sweetener.

What is a sorbitol intolerance or sensitivity?

It is quite common to have an issue digesting large amounts of sorbitol in one sitting. It is poorly tolerated by many, especially those with a sensitive gut, like people with IBS. Sorbitol is quite a small sugar so it is digested by passive diffusion, through the walls of the small intestine. In large quantities, it can cause osmotic diarrhea (watery diarrhea). The undigested portion will move along to the large intestine, where it is broken down by our gut microbes. There can be a rapid build-up of gas, resulting in abdominal pain, bloating and excess flatulence.

What can doing the Sorbitol Challenge with my FoodMarble AIRE tell me?

By performing a sorbitol breath test, you will be able to get an understanding of how well your body can tolerate and digest sorbitol. A big factor is how long the sorbitol remains in your small intestine (your transit time), as this will dictate how much is passively absorbed through the small intestinal wall.

We have taken a selection of results from our users who have already performed a Sorbitol Challenge. We selected three different results for interpretation.

Each user consumed 10g of sorbitol, which is approximately equal to the amount of sorbitol present in a medium sized pear.

If you have already done a Sorbitol Challenge and recorded high fermentation and symptoms, you could consider trying a Custom Challenge but using a much lower dose of sorbitol.

Finding the foods that are absorbed well and don’t cause symptoms for you is important, so that you can avoid unnecessary eliminating foods.

PLEASE NOTE: FODMAP Challenges are tested in a fasting state, which reduces the chance of experiencing uncomfortable symptoms. However, if you were to eat or drink something containing sorbitol after a meal containing a large amount of fermentable foods, that could result in symptoms, as the combination could result in an excessive amount of gas production. Since the effect of what you eat and drink is cumulative, it’s important to log your meals and take multiple breath readings over the day to see the combined effect of your meals. 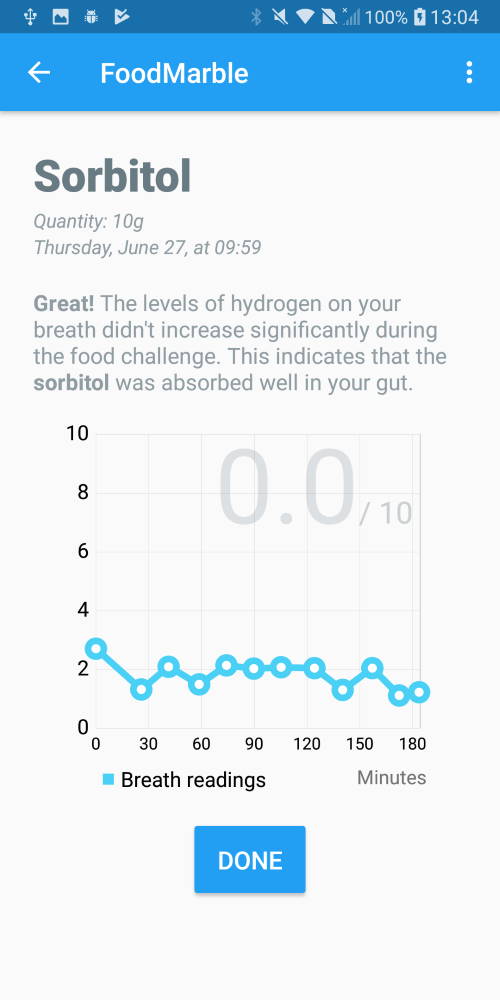 The final result for this challenge was 0/10. The user didn’t experience any uncomfortable symptoms during or after the challenge, so it is likely that their body is able to tolerate 10g of sorbitol quite well.

It’s possible the user fully absorbed the portion of sorbitol as there was no measurable level of hydrogen on their breath during the testing period. Alternatively, the hydrogen produced from the fermentation of the undigested sorbitol may have been consumed by other resident microbes in the gut. Hydrogen is an important by-product and can be used to make other products that are beneficial for the body.

The final result for this test was 3.8/10. You can see from the graph that there was a peak in hydrogen production at 1 hour 45 minutes, and remained at a similar level up until the second last reading, where it has started to drop.

This particular user has IBS and found they had a number of loose stools during the testing period. They also found that they became bloated towards the end of the test, which changed to abdominal pain later that day. For some people, certain symptoms appear after the peak in breath hydrogen.

The level of hydrogen produced was at a medium level, but considering they have a sensitive gut and had a clear osmotic response to this dose of sorbitol, we would recommend that they consider reducing the level of sorbitol in their diet, in order to avoid uncomfortable digestive symptoms.

The final result for this challenge was 8.4/10. This user experienced quite a significant level of hydrogen production during the testing period. This strongly indicates that the portion of sorbitol (10g, similar level to a pear), was not absorbed well.

This user felt some minor flatulence and increased bloating, but did not experience any other digestive symptoms. They said that they measured their breath 1 and 2 hours after the testing period and their fermentation levels had already returned to baseline. This would suggest that they have a good ability to expel excess hydrogen, either by breath, flatulence or consumption by other gut microbes present in their colon.

We recommend this user to be aware that their body doesn’t absorb sorbitol well and to be mindful when meal planning. This user was in a fasted state, meaning their digestive tract was fairly empty of gas and food-stuff, so they were less likely to experience symptoms during a challenge. There is still a potential for generating symptoms on a regular day, if sorbitol was consumed in conjunction with a meal containing a mix of FODMAPs.

Check out my previous blogs on the Lactose, Inulin and Fructose Challenges, and keep an eye out for upcoming blog posts covering the other FODMAP Challenges. If you complete a challenge and would like to discuss your result, please feel free to contact us! You can email hello@foodmarble.com or contact us on any of our social media channels!

FoodMarble AIRE is the world’s first personal hydrogen breath tester. It is a pocket-sized breath analysis device. It helps people with chronic digestive issues determine the foods that work best with their digestive system. To learn more about FoodMarble, visit foodmarble.com or follow us on