There are numerous types of fermentation, depending on the medium doing the breaking down, and in my new “FoodMarble Ferments” series of blogs, I am going to introduce some of these to you.

Humans have been fermenting food and drinks for a long time – with archaeological proof of beer existing 7000 years ago! At its core, fermentation is when a substance is broken down by bacteria, yeasts or other microorganisms, and it is the by-products of this breakdown (usually alcohols and acids) that we have been taking advantage of. For example, beer is made when yeasts break down sugars/ carbohydrates to produce alcohol and CO2. In bread, the yeast produces CO2 to give rise to the dough.

But what are the benefits of fermented foods?

Modern diets, high in refined sugars, can contribute to an imbalance between the good and bad bacteria in the gut – by feeding the bad bacteria and enabling them to flourish. Eliminating refined, high sugar foods and including probiotic-rich fermented foods in your diet is thought to bring the gut back into balance and improve your digestive health.

Sugars within foods are broken down as part of the fermentation process. Some of these sugars (like fructose and lactose) can be triggers for digestive issues, for example IBS. Through fermentation, these troublesome sugars can be reduced. This is why some people who usually find lactose hard to digest can eat live probiotic yoghurt without symptoms.

Finally – fermented foods taste great! Fermenting a fruit or a vegetable gives it new characteristics like acidity or sourness. Michelin starred restaurants such as Noma in Copenhagen include some sort of fermented item in every dish on their menu.

Most of you will have tried lacto-fermented food before – for example, pickles are created through this process. Bacteria in the cucumber break down sugars and produce lactic acid, giving them their delicious sour taste.

As the lactobacillales are naturally occurring in the fruit or vegetable being used, we do not have to add an external fermentation medium (like yeast) to the mix – making this one of the easiest types of fermentation to perform.

However, there are caveats to lacto-fermentation. As we are giving the naturally occurring bacteria of the fruit/ vegetable a little kick to do their thing, we must make sure we don’t encourage the growth of other harmful bacteria. Lactobacillales love anaerobic (oxygen free) environments, so removing the air from the process helps promote these bacteria and has the added benefit of stopping unwanted moulds from multiplying. This is normally done by submerging the fruit/ vegetable in water or vacuum sealing it.

Next, we create an acidic environment by introducing salt. This doesn’t help or inhibit the lactobacillales, but it does kill a lot of unwanted party guests. Combining the anaerobic environment, and salt, gives the brine you see pickles come in.

One last note before getting started – be sure to get organic fruit and vegetables where possible. Avoid those coated in wax, treated with pesticides or irradiated, as some if not all of the lactobacillales will have been killed during this process.

For these lacto-fermentation experiments I am following the experts, using the methods outlined in the book “The Noma Guide to Fermentation”. This Michelin starred restaurant is one of the foremost authorities when it comes to fermenting and their book lays out their vast experience in an easy to follow manner.

So, I will be trying out the recipes for lacto-fermented tomatoes and blueberries outlined in the book, and I will document how I get on in the FoodMarble HQ. At the end of the process I will make the gang in the office try my creations, and hopefully not kill them. With that said let’s get started!

Having purchased some tomatoes and blueberries during my weekly shopping, I arrived into work this morning with a vacuum sealer, weighing scales and a mild optimism. Much to the delight of my colleagues I took my science experiment to the communal kitchen, making it my makeshift lab. 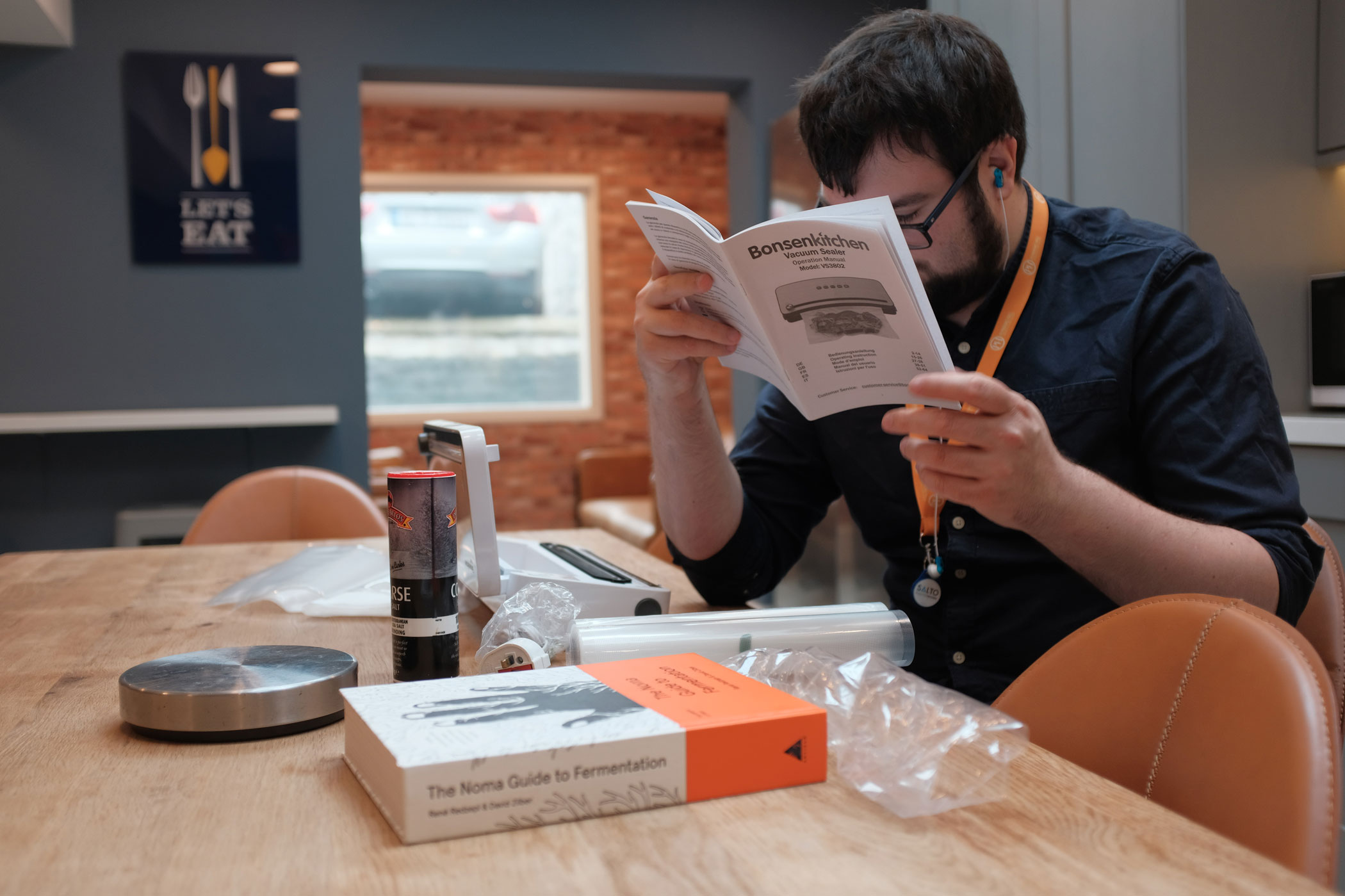 We want to weigh the ingredients to gauge the amount of salt to be added to the ferment. Ideally, we want to aim for 2% of the weight of ingredients in salt. I started by gently washing the outside of the tomatoes, removed the stems and chopped them into segments. They were then tipped into the vacuum sealing bag and the salt was added. Shaking the bag to mix the salt, the tomatoes were then laid out into a single layer in the bag, and it was then very satisfyingly vacuumed and sealed by the machine. 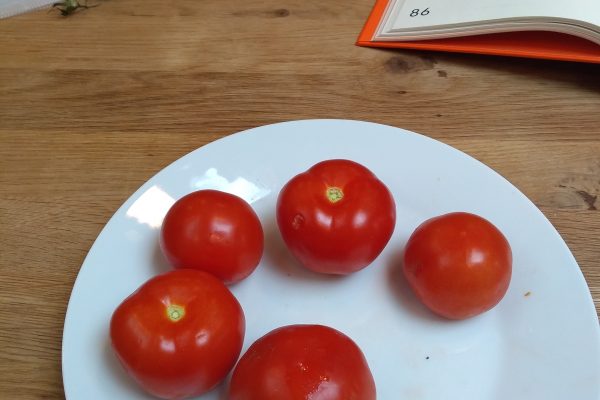 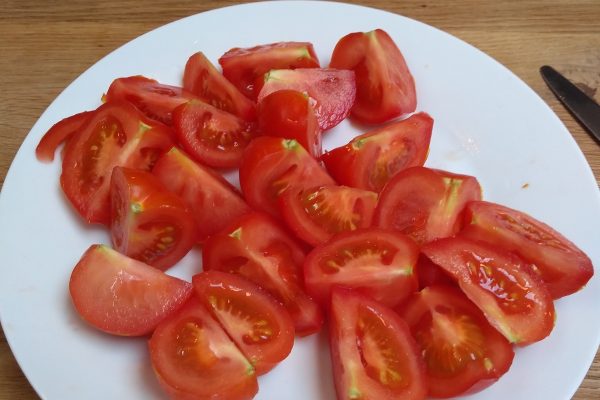 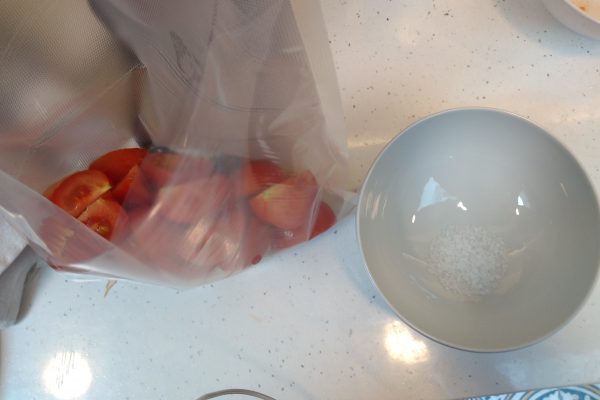 Next the blueberries. This was even easier as they didn’t need to be chopped. So, after a quick wash, and tossing with salt (again 2% of their weight), I laid them out into a single layer in the vacuum seal bag and sealed them up.

Now, the waiting game. The book says it will take 4-6 days at room temperature, but the gases will need to be burped a couple of times. I will worry about that when the time comes. For now, I put a sticky note on the bags, so no one throws them out, and I stick them in the cupboard. I will check back tomorrow to see if there is any gas build up – the gas build-up indicates that fermentation is taking place. 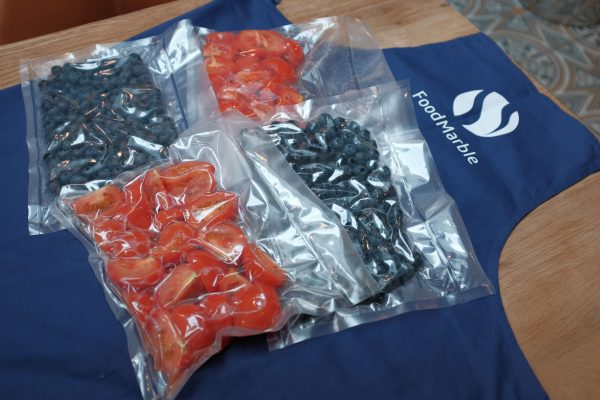 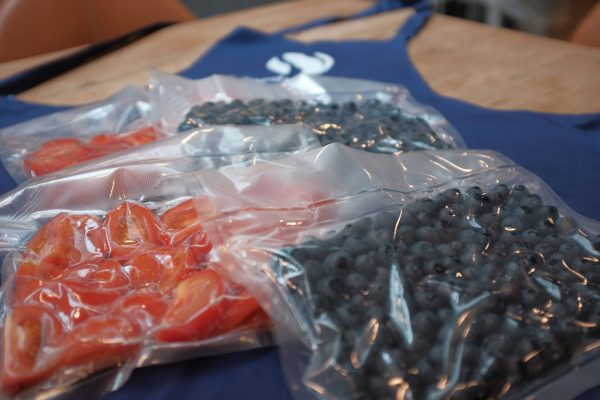 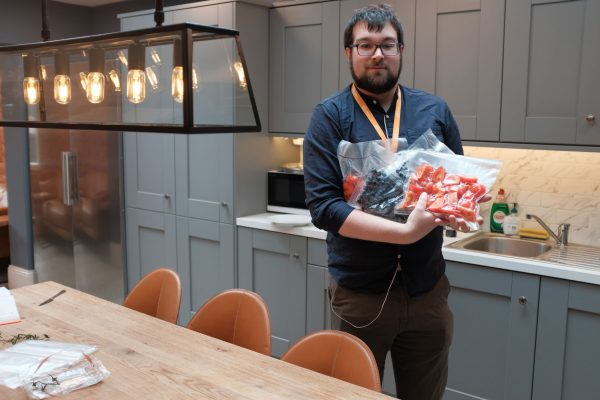 After checking on the bags this morning, no major developments had occurred. The book warned of gas build-up in the bags as fermentation takes place – clearly, we are too early in the process for this to have happened. The bags containing the tomatoes had a lot of liquid in them, from the beginnings of the breakdown. The blueberries had less so, but as I did not cut the blueberries this makes sense.

Nothing else to report on Day 1, but this is a week long process so not much happening after day 1 is ok (I hope). I will check again tomorrow and see if anything significant has happened.

Day 2: Something is happening

After checking on the ferments this morning I saw a slight build-up of gases in the bags of blueberries, so they will need to be “burped”. However, there was no reaction in the tomatoes. I am worried that as I did not buy organic tomatoes, there may have been pesticides or chemicals on the skin of the tomatoes that killed the lactobacillales and will hinder fermentation – we will see what happens when they are left over the weekend. For burping the blueberries, all I do is simply snip the corner of the bag and re-vacuum seal it with the vacuum sealer. These will now be left over the weekend, so I won’t get to chart the progress over the next couple of days. Who knows what I will arrive into on Monday morning!

When I arrived back after the weekend, I was apprehensive to check on the ferments – and there was a surprise waiting for me! The tomatoes have finally kicked off and the bags were like balloons waiting to burst. Clearly the fermentation took a few days to get started and when it did, it was drastic. This meant the tomatoes needed to be burped. The ferments will be left one more night and harvested tomorrow.

So today I am going to sample the fermented blueberries – with assistance from my colleagues. The book recommends a series of recipes for each of its ferments, and for this taste test I am going to use the blueberries as a breakfast topping. I bought some natural yoghurt and granola and got as much of the team together as I could in the Foodmarble kitchen. I served them a small bowl of yoghurt with granola, with a couple of the fermented blueberries and a little bit of the juice from the bag.

Now, I will be honest – there was a spectrum of opinions. Most people’s reaction was that they weren’t that bad, with one team member saying he quite liked them, so I will take that as a success! The flavour of the berries changed from a predominantly sweet taste, to a mix of sour and sweet. This was the effect of the lactobacillus consuming the sugar within the berries and producing lactic acid. Certain berries were sourer than others and they elicited some funny facial reactions. Overall, I think this fermentation experiment went well and the only improvement I would make, would be to make sure I bought organic blueberries in the future.

The tomatoes required a little processing after fermentation, so I took the bags home and put them in the fridge to halt the fermentation process until I was ready. 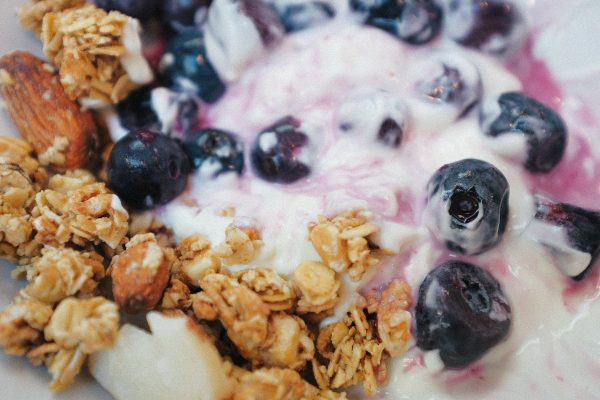 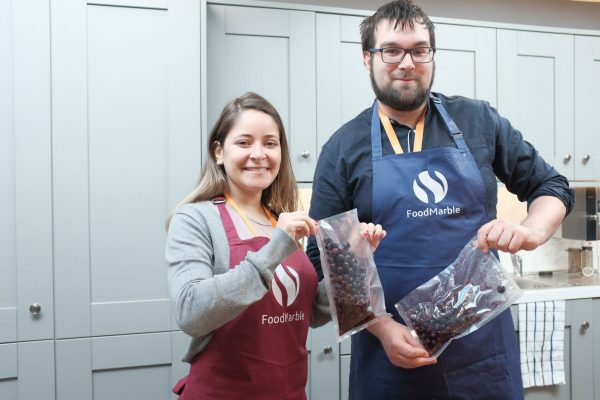 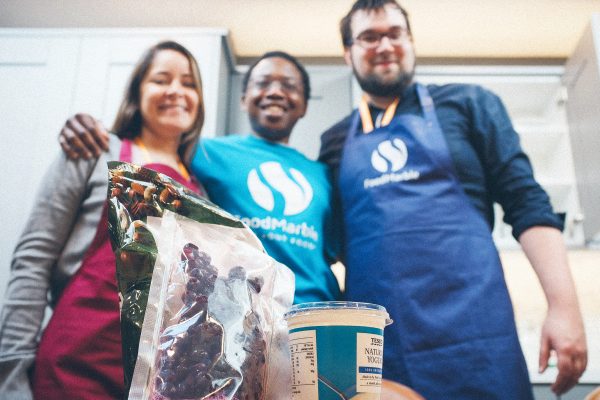 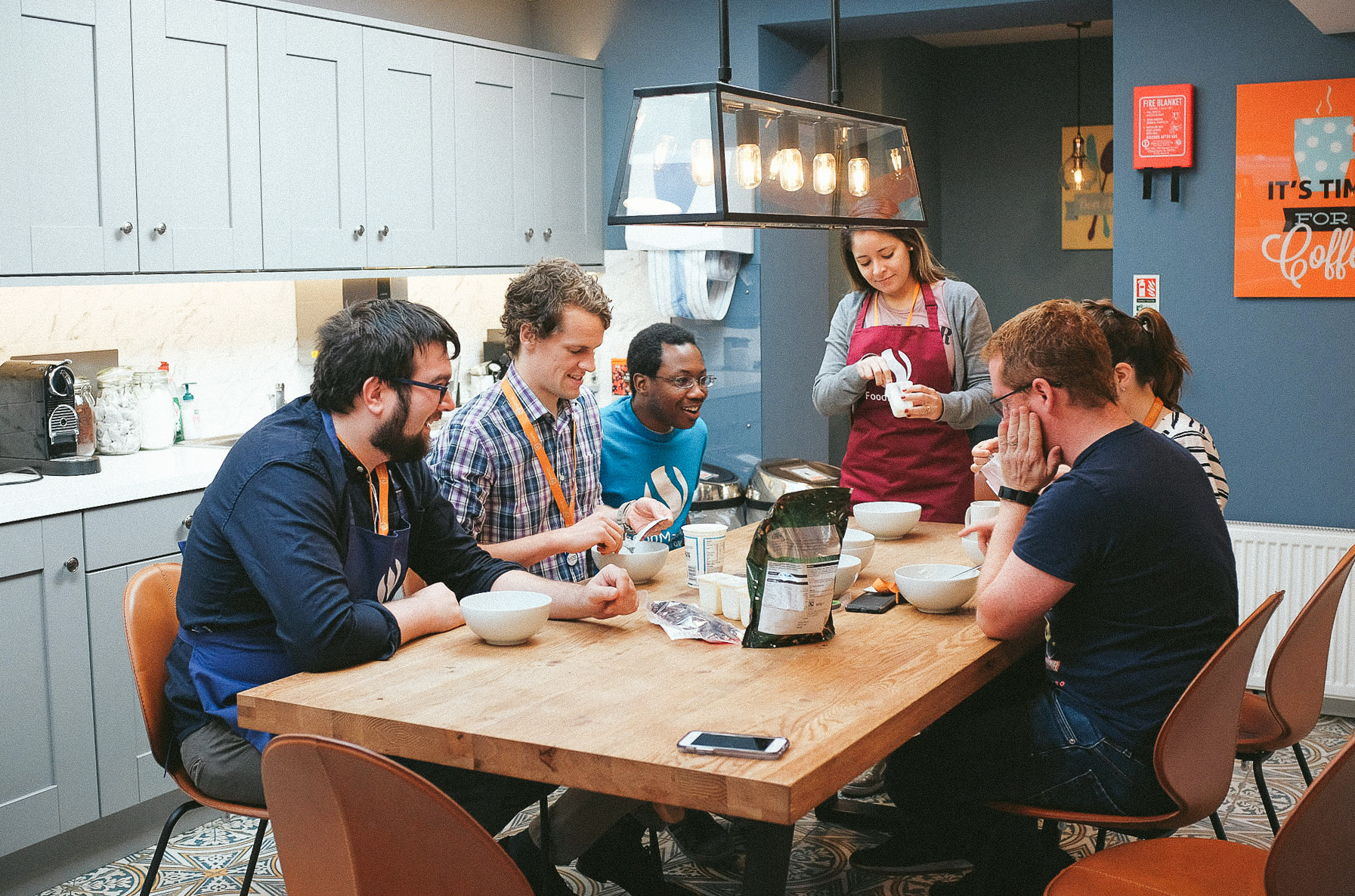 A week later I finally found some time to do a bit of cooking at home. The book recommends serving the lacto-fermented tomato water with seafood, while the flesh can be added when making any tomato sauce to give it a new flavour. Rather than trying to serve my work colleagues salmon or cod, I decided to make a pizza using sauce made with the fermented tomato flesh. I have the tomato water frozen at home for the next time I have seafood for dinner.

To make the sauce I started by sweating some onions and garlic in a pan (if you’re on the elimination phase of the Low FODMAP diet, you will want to avoid the onions and garlic but can use onion/ garlic flavoured oil instead), then I added some mixed herbs, store-bought tomato passata, and about half as much lacto-fermented tomato flesh. I let that simmer on a low heat for 30-45 minutes. I used this sauce on a pizza with just some mozzarella, topped with rocket leaves to make it look somewhat healthy!

My colleagues awaited Pizza Day with bated breath. I brought it out at lunch and it went down a treat. Everyone agreed the sauce was very different but was quite delicious. Indeed, it had a slightly more sour and deep flavour (I swear I am not a pretentious food critic, but that was the only word I could use to describe it!) – a delicious alternative to ordinary tomato sauce. 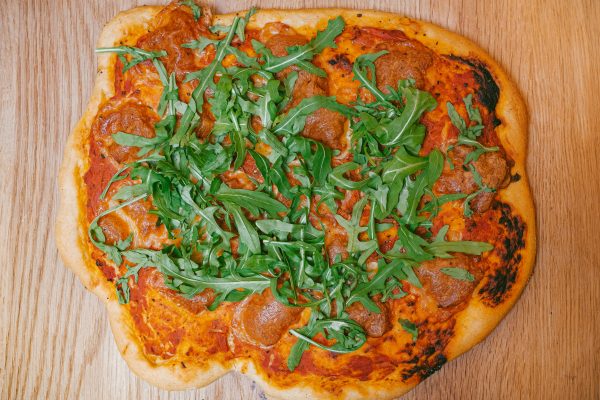 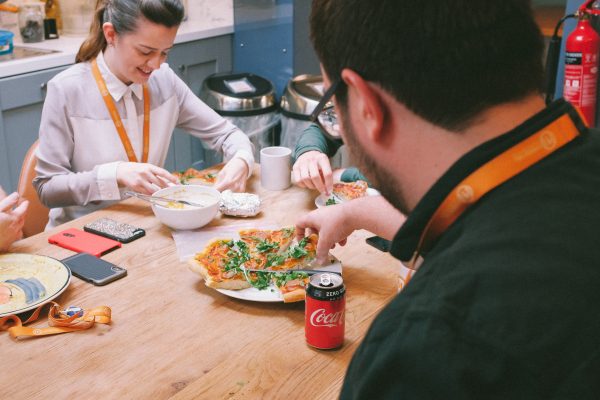 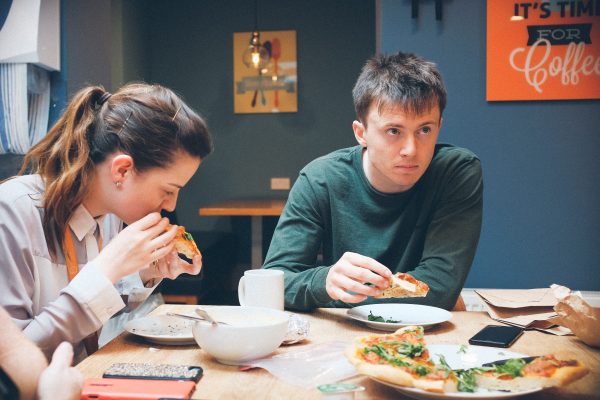 At the end of this week-long (technically two weeks, but it could have been a week if I had time to make a pizza from scratch earlier) experiment it is important to look back and see what we achieved and what we would change in doing this again.

I believe we successfully lacto-fermented some blueberries and tomatoes, changing their flavour profile and texture, while also making them healthier for your gut. I also exposed my work colleagues to new flavours – some enjoyed them more than others, but everyone agreed it was a worthwhile experiment.

In terms of improvements, next time I will buy organic blueberries and tomatoes to ensure a better fermentation. Also, we had some trouble with the vacuum sealer, but we eventually figured it out.

I hope you learned something about fermentation and will consider taking up fermentation at home – it is both a rewarding learning experience and can help improve your gut health.

Keep an eye out for our next fermentation blog where we will tackle the subject of kombucha. It will be very different from anything you can buy in the health food aisle of your supermarket – and much cheaper! 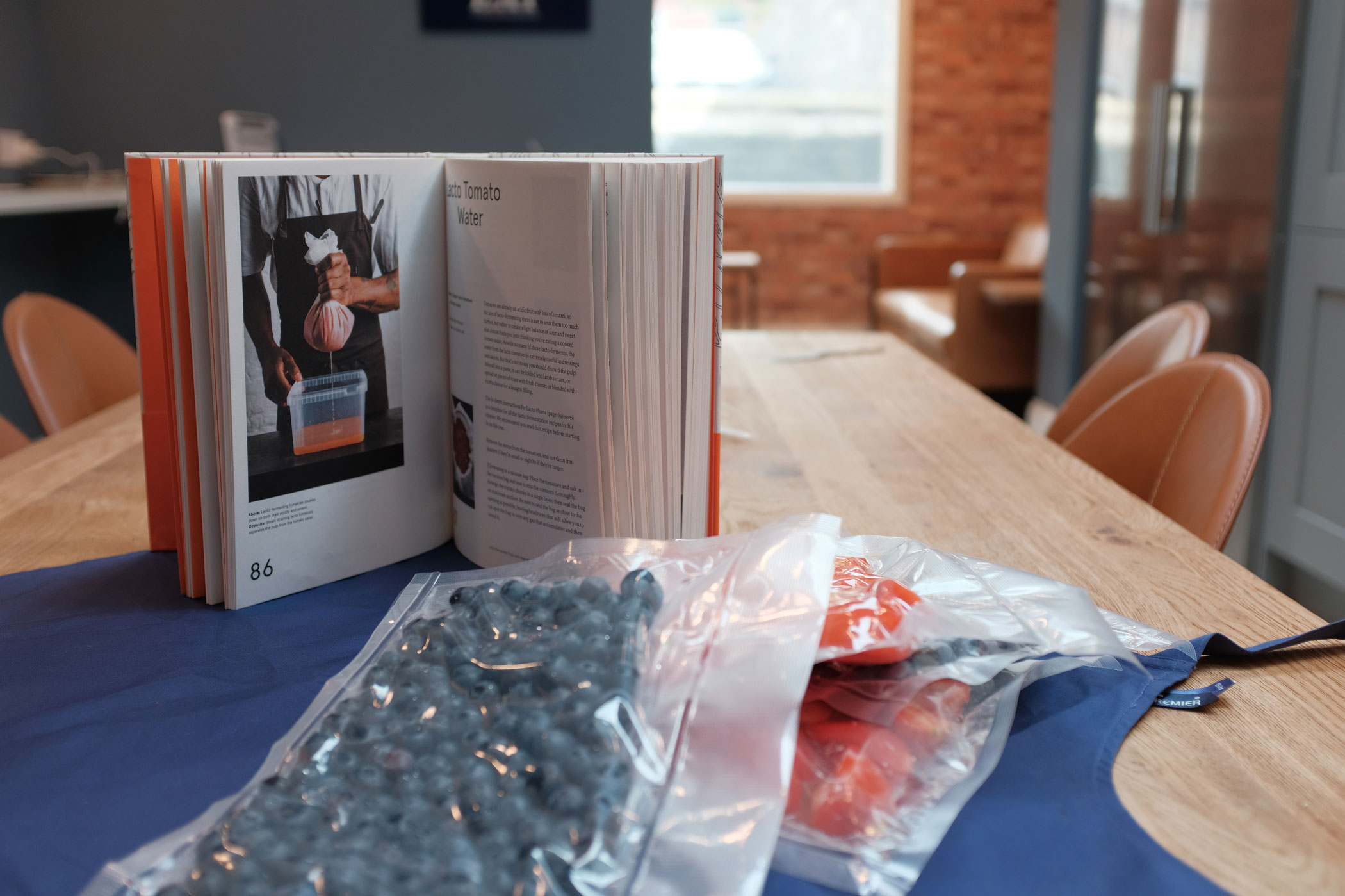 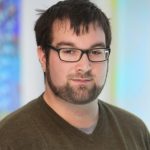 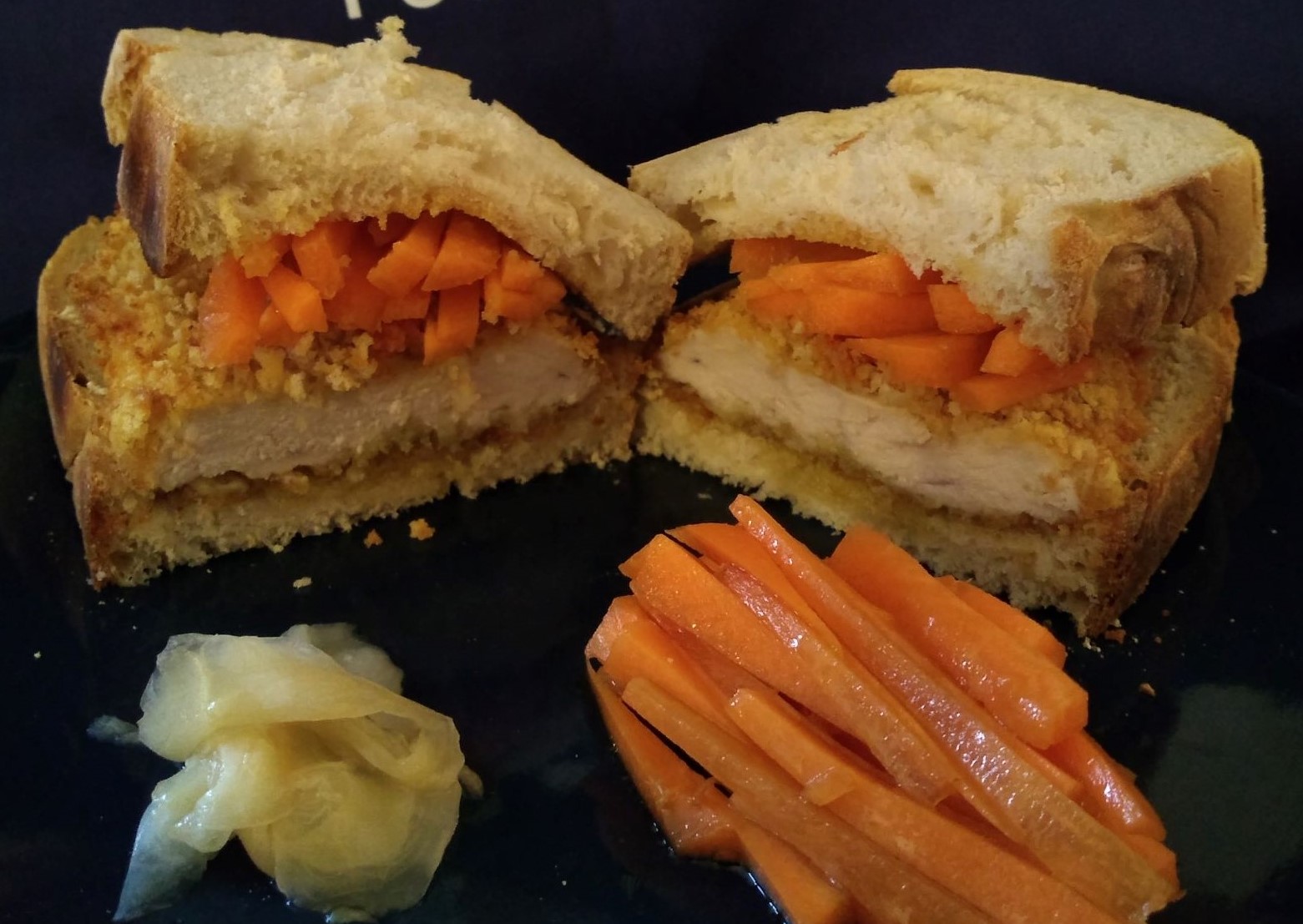 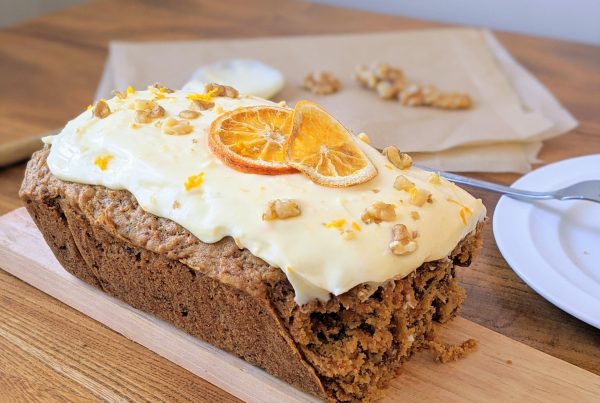